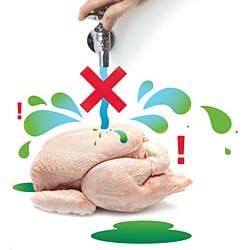 The most common cause of food poisoning is caused by the Campylobacter bug.  You can’t see, it taste it or smell it, if you’ve ever had campylobacter food poisoning you’ll never forget it.  The groups at the highest risk are children under 5 years old and people over 60 years.

Onset is 2-5 days, making it very difficult to know where you picked it up from and it can lead to abdominal cramps, diarrhoea and vomiting, in the very worst cases it can lead to reactive arthritis, irritable bowel syndrome, diseases of the nervous system and it can KILL.

80% of cases of campylobacter in the UK originate from contaminated poultry but cooking the poultry thoroughly will kill it.  However, the most common way of picking up the bug is by cross contamination.  This means that utensils, your hands, work surfaces and taps (when you’re washing your hands) have raw poultry juice transferred to them and from there transfer to cooked food.  The chicken that was contaminated has been cooked so it’s safe to eat but the other things that have come into contact with the raw poultry aren’t, that’s what gives you food poisoning.

What can you do?

Just because celebrity chefs do things on the TV doesn’t mean it’s right or safe to eat.