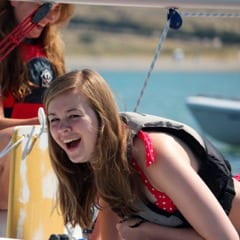 Our children, aged 17, 14 and 12 are all booked into clubs. The 17 year old wasn’t impressed at being booked into TAG as she’s almost 18 and declared that ‘she’d see what the people were like’. Our 14 year old is in Wave Riders with other year 9 and 10s and small boy, who’s 12, is in Surf Squad with other year 7 and 8s. The activities are so good I haven’t seen them all week.

The clubs run through the day, including lunchtime and dinner so the children are supervised virtually from 10am through to 10pm. Last year small boy spent the first morning in club at a beach club who weren’t Neilson and declared it ‘boring’, after that he just hung with a bunch of boys he’d befriended. This year we haven’t seen him, he’s basically been on the water most of the time, in kayaks (3 hours one afternoon), daily catamaran joy rides, gladiators style battles on the SUP boards, plus cycling into town for ice creams.

In Wave Riders they’ve been in the pool frequently with battles, water polo, pool Olympics with the aid of kayaks and paddleboards, etc, plus volleyball and yesterday they had chocolate fights, brilliant, everyone had chocolate and they had to try and cover each other in it without getting covered themselves.  Then they attempt to wash it off in the sea, fab parental entertainment.

In TAG – teenage action group, they’ve also been constantly on the water, two teams had to build rafts (anyone who’
s been to a sales conference knows about these) then the other half of the TAG had to capture the rafts, sort of pirates really. Again parental entertainment on the beach. Yesterday they had ‘water slides’, huge sheets of plastic on the grass with hosepipes, brilliant. Beach entertainment this afternoon came in the form of ‘sharks’, two sharks in the water, the rest in kayaks, all in helmets. The two sharks had to capsize the kayaks and last man in a kayak won. That became interesting when it was a two man kayak and they turned on each other.  Today the whole TAG group have gone off on a gullet cruise with soft drinks only.

How do we know what they’ve done every day? Do they tell us? No. So how do we find out? Clare Edmead Photography, that’s how. This is totally and utterly brilliant. There are three photographers on site who work for Clare and they go all over the place taking photos of everyone. I spotted one on the fun boat used as one of the outer sailing markers waiting for victims. Every afternoon the photos are up loaded onto four computers in the pool bar and you put the ones of your kids, you etc into your shopping basket, at the end of the week they are transferred onto CD to take home for around €95. It’s the only way we would have any clue what our children are up to, plus we have fabulous photos that otherwise we would not have as we wouldn’t have been there to take them. I think it’s worth every penny. Whoever had the idea for this deserves a medal.

You do have to like your partner as you see an awful lot of them over the week as the children are off have huge amounts of fun without you. Windsurfing update The beach team are wonderful, by the end of my week I’ve managed to sail in a wind (on Sunday I was terrified of any slight amount of wind) sail over the wake of the speedboats (on Sunday I fell off a lot) and today I was sailing in winds gusting 4-5, plus I finished the morning with a beach landing, on purpose this time. My previous beach landing was going backwards when I was aiming to go out to sea, so that didn’t count. I was rather loud about it and Nathan mentioned that all the beach had heard as he helped me take my kit apart. In all the 22 years I’ve tried to learn to windsurf I can honestly say that I’ve never spent so much time on the water. Usually it’s been a morning or afternoon lesson, this year Neilson have changed the way they teach and it’s two sessions a day, morning and afternoon to help you get going quicker, it works.