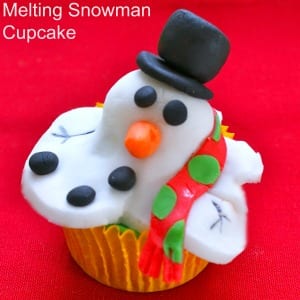 These are lovely made with half wholemeal and half white flour, it makes them a little healthier.

How to make melting snowmen Christmas cupcakes… WASH YOUR HANDS

2.      For the cupcakes – sieve the self-raising flour into the mixing bowl along with the baking powder, stir in the ginger, cinnamon, mixed spice, grated orange zest and sugar.  Add the chopped nuts if using.

3.      Mix the melted butter, egg and milk together pour into the mixing bowl.

4.      Mix everything together with a wooden spoon.  It won’t look like normal cake mixture, it will look very lumpy and a bit odd, it’s meant to look like this, DO NOT try to beat the lumps out.

5.      Split the mixture evenly between 12 cupcake cases in a muffin tray and bake for 15-20 minutes until pale golden and springy to the touch.

6.      For the orange fondant icing – mix the fondant icing sugar with 2 tablespoons of freshly squeezed orange juice, add more orange juice little by little until a thick consistency is reached.  Colour the icing green if you would like it to look like grass – for the snowman to melt onto.

7.     Remove the cakes from the oven and transfer to a cooling rack to cool slightly. Ice with the orange fondant icing and finish with the melting snowman

9.      Stick a piece of dried spaghetti through the cake and secure the white ball in position through the spaghetti.  Drape the white wobbly edged sugarpaste over the top and pinch in around the ball so this looks like the head with the flat sugarpaste becoming the body.  Sticky some more dried spaghetti through the head and secure the hat, then press on the eyes, nose and buttons using a little water to help them stick, drape over the scarf and draw stick arms and hands on with the food writer pen.