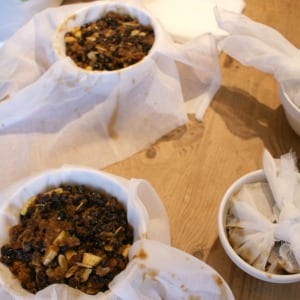 Stir Up Sunday is the traditional day for making your Christmas Pudding and this year it falls on 23 November.  Homemade Christmas pudding is the best, very easy to make but it takes a little while to steam but once you’ve made your own there is no going back.  Here are some traditions:

The term Stir-up Sunday comes from the opening words for the day in the Book of Common Prayer of 1549.  The collect is the prayer of the day that ‘collects’ up the themes of the readings during a church service.  The original prayer used to start:

‘Stir up, we beseech thee’, – hence the term Stir Up Sunday.

‘Stir-up Sunday’  is the Sunday before Advent – the end of November – and everyone in the family takes a turn to stir the pudding with a wooden spoon from East to West (clockwise) in honor of the three Kings making their journey, with their eyes closed whilst making a secret wish.  The sprig of holly is a reminder of Jesus’ ‘Crown of Thorns’.  Holly also was supposed to bring good luck and is said to have special healing powers.

Another custom is to put silver or gold items into the pudding; each has a special significance:

–    Silver coins are supposed to bring luck to whoever finds them in their slice of pudding on Christmas Day.

–     A gold ring signifies that the finder will be married before the year is out.

–     A silver thimble or button signifies that the finder will never marry and remain a spinster or bachelor forever, or if people didn’t want to upset whoever pulled out the thimble the meaning was changed to ‘having a lucky life’.

There should be 13 ingredients in the pudding to signify Jesus and his 13 disciples; my recipe has more ingredients because I think it tastes better.

Legends surround holly go back much further into human history.  It’s one of the few evergreen trees abundant in England in the winter and as such was considered magical as remained green and bore fruit throughout the darkest, coldest season.  The Druids believed that it kept it’s leaves and shiny red berries to help keep the beautiful throughout winter when the sacred oak lost it’s leaves.

It’s Stir Up Sunday today so gather the family together and make your Christmas Puddings and Mincemeat, I have some lovely recipes on my recipes pages, so check out