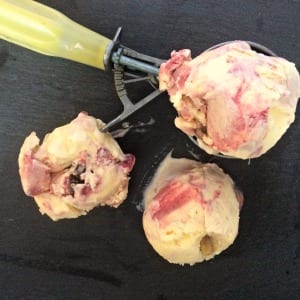 I’ve attempted to recreate the Sour Cherry Ice Cream I tried at Boho Ice Cream in Weymouth which, I have to say, is my favourite, ever, flavour.  I’ve had a bit of a nightmare trying to get hold of the Sour Cherry Coulis, or any Sour Cherry flavouring and eventually used Morello Cherry Fruit Puree from a specialist supplier (who I buy my chocolate from) Keylink.  It’s pretty good, not quite as sour as Boho’s but still damned good.  It’s also a really easy base.

The Cherry Ripple is on the right of the picture, the one on the scoop