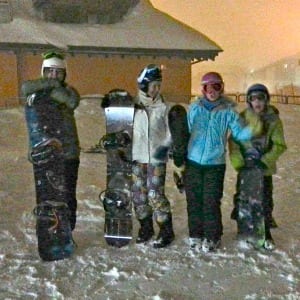 I spent a week snowboarding with 5 of my girlfriends some 9 years ago in La Plagne, France.  The decision to choose snowboarding over skiing was purely down to the fact that myself and Lisa could ski well and the other 4 had never skied so we figured we’d all try something different…disaster.

My major achievement of the whole week of snowboarding was being the only one to get up a drag lift without falling off – managed this once and once only. Plus at the end of week I managed to get off a chair lift without taking everyone else out or having to aim for a tree to stop.  Between the 6 of us we spent a fortune on kevlar reinforcements, wrist protectors, knee protectors, state of the art back protectors and came home very bruised and battered.

Nine years is a long time and you forget, it looks cool so let’s have another go.

Our 11 year old son really wanted to have a go, having spent 3 days in ski school he reckoned that he’d mastered skiing (yeah right, flying snow plough), could get down anything he wanted so he was now an expert skier and wanted to try something else (hmm!)  During the busiest week of the year, Haley, the resort manager at Crystal, managed to negotiate us an hour slot with an instructor on Thursday.  We’d skied in the morning but the weather closed in and it started snowing, a lot.  The forecast was for 3-4 cm, it was more like 30cm, you couldn’t see and this is not my idea of fun skiing, this is survival skiing and time to retire to a bar.  However, this soft powder snow is brilliant for a snowboard lesson.

Why is snowboarding better than skiing?

1.  You look really cool – even just carrying the board

2.  The boots are soft and comfortable

Back to the dreaded ski hire place, this time on a Thursday at 2.30pm – it was empty, I’ve never been in a ski hire place that was empty, it’s always been a bunfight, this was heaven.  As most of the gear was out on hire we had NEW, yes, NEW boots, bliss.

Next to walk, looking cool, over to the ski school to meet Rodo our lovely instructor.  Now, one of the major difficulties with snowboarding is using lifts – see above.  Passo Tonale is a brilliant resort to learn to snowboard in as they have a moving carpet lift so no having to negotiate drag or chair lifts, take your board off and stand on the carpet amongst a whole load of 3 and 4 year olds (OK, that’s the downside).

The snow was amazing for a boarding lesson, it was soft to fall over on, yes I remembered by knee pads and they were invaluable.  My knee loved snowboarding.  It had begun to twinge a little after I lifted off going over a bump on Tuesday, when I was in mid air I knew that landing would be bad and it was, so I was worried about the effect snowboarding would have.  It was better, it actually helped the soreness and my knee was a whole load happier.  My back wasn’t, but that’s another story.

By the end of the first hour I’d managed to turn both ways and pretty much get down the slope without falling over, whahey.  My son loved it, hardly fell over and took to it like a natural, guess what he wants to do from now on?

We kept going after the hour until, very wet (it was snowing heavily by now) we made our way to the Magic Pub for very well deserved Aperol Spritzers and cola for the kids for some celebrating. It was still snowing when we came out, fab conditions for Friday’s last skiing day.

I also discovered an alternative use for a snowboard – it makes a great sledge, so when you come out of the bar after 2 Aperols you sit on the snowboard and sledge back to the hotel (do not try this at home, it is very dangerous to drink and ski, snowboard or sledge and I was very irresponsible, slapped wrists).  However, the children had cola and loved sledging safely.

One final suggested use for a snowboard – it doubles nicely as an air guitar, especially when standing on the bar singing – see photo, please note this was 5.30pm.