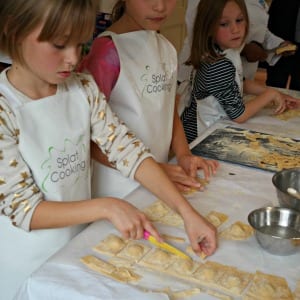 I had heaps of requests to make pasta, especially ravioli, from the children from my Saturday morning cooking club.  So today I kept my promise as we made cheese and ham ravioli with the option of turning this into tortellini.

Audrey at Tring made Mini Victoria Sponges, which I think looked equally as good as the ones of the Great British Bake Off last week.   The difference being that the contestants on the GBBO were all over 10 years old and had a lot more experience than our children did, plus they had time to pipe the buttercream, we didn’t.  All in all I think the children could give the contestants’ Victoria Sponges a run for their money, don’t you?

Back in Princes Risborough with the help of Ruby and Chloe, my red and pink KitchenAids plus pasta rollers, the children made the pasta by hand then used the machines to roll the dough.  There were a number of requests of where to buy the KitchenAids as the pasta attachments make it so easy to roll out the dough, much easier than the hand machines.

The filling was made with or without sun dried tomatoes, this week it was the younger children who were more fussy re the filling than the older ones, which is unusual.  Usually the littler ones go for it and will try most things, whereas the teenagers are the ones who need coaxing into trying new foods so that made a nice change.

Here’s the video on YouTube so you can see the reaction to sun dried tomatoes.

Making tortellini was a little more fiddly to make, making sure you didn’t put too much filling in the centre and then wrapping it around a finger while attempting to stick it together with the other hand was great fun.

At the end of the morning the children all had a selection of ravioli and tortellini to take home, cook and share with their family, I await feedback next week when we’re making eclairs.