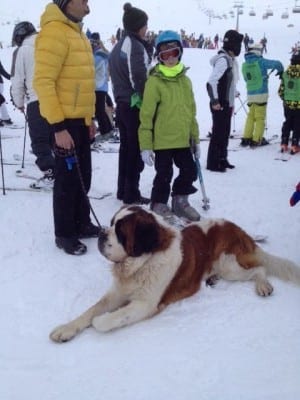 I’m not going to talk about the ski hire shops save to say that nothing changes, it’s a bun fight, expect a bun fight and if it’s any more leisurely then it’s a bonus, nuff said.

It’s Saturday night and our first day in the resort. Crystal have a new way of meeting the punters, they no longer do welcome drinks which usually involved cheap fizzy wine, now they’re in a bar between certain published times, giving you a damned good excuse to go and have a beer from the slopes, as if you’d need an excuse? Not just on the first night either, this is most nights so you can pretty much guarantee that whichever bar you decide to go into there will be a Crystal rep, completely sober, chatting to the punters and giving great service…..I’m being serious here! Can’t believe how well behaved they’re being, the temptation must be dreadful.

First night La Botte bar, kids dead impressed that you get popcorn and crisps free with your drinks, great atmosphere. Sunday straight from the slopes we ended up in the Magic Bar, happy hour is 4.30-5.30 and beer is half price, result, bumped into the lovely Jordan entertaining the punters, had a good chat and he persuaded our eldest to go on the ‘tour of the town’ yeah right, pub crawl. We were not given parental consent to go with her as that would be too embarrassing and Jordan and the other reps took really good care of her and she got back before curfew. I must add that she’s off to uni in September old enough to be classed as an adult.

Ski instructors – I’m used to French ski instructors which is why I’ve not been in ski school for a very long time, but with an 8 year gap I thought I’d best have a few lessons and was pleasantly surprised, both Mauro and Alex were lovely, apart from Alex taking us on a black run this morning for our ‘warm up’ run. The children say that their instructors are lovely too and small boy is now bombing down everything, jumping, and going off piste, from someone on Sunday who swore he was never getting on a chair lift ever again this is a major achievement. He’s even keen to try snowboarding as he feels he’s cracked skiing and doesn’t need any more lessons ever, 3 days, that’s enough.

Last night was the weekly torchlight descent when the ski instructors come down one of the runs at 9.30pm carrying flaming torches, not to be tried at home. Wow, it was brilliant, the torches were green, white and red, the colours of the Italian flag and the descent was fabulous, plus free vin brulé (Italian version of mulled wine) followed by a firework display and music on the snow so a bit of dancing to keep you warm. A superb evening not to be missed if you’re here, if the children say they are too tired don’t listen, wrap them up warm and take them, they are on holiday and can catch up with their sleep later or they will miss a treat.

We are also getting our dog fix, a huge St Bernard was on the slopes having a lie down, there was a golden retriever and golden Labrador watching the fireworks with us so we caught up on our dog hugs.

Food on the slopes, Magic Bar is good, cheap and fast service, panini, wraps, hot dogs, fries, pizza slices for around €4.50 or goulash suppe and pasta for around €8, about €2 less than on the slopes. Only downside is the queue for the toilets, there is only one and I reckon it took me 15 minutes to get through, but come 1.30pm the queue disappeared so time your toilet breaks well.

Drinks, well the local tipple is something called a Bombardino, basically advocaat, a rum flavoured custard licquer served warm with whipped cream on top. They have Jaegertee which I remember from my first skiing holiday in Selva and have yet to try but it’s on the list.

Much to amusement in the bar this evening these two big blokes dressed all in black ski gear looking very butch ordered Aperol, the ‘on trend’ drink of 2013, imagine Campari but orange, served with lemonade or soda in a large bubble glass with ice – so girly it’s untrue, then they started speaking, Russian, figures. Off to have one now to see out 2013, Happy New Year