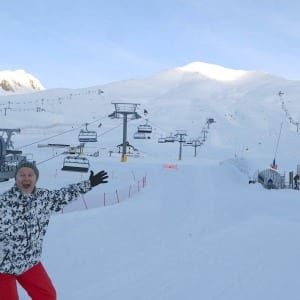 We are staying in THE posh hotel of the resort, the Grand Hotel Miramonti, it’s about as close as you can get to the slopes, the food at supper is generally fabulous, the breakfast is best described functional.

New Year’s Eve is a closed event, by that I mean you have to buy tickets to get into any of the bars and if you don’t have a ticket you can’t get in, if you’re in a hotel in the resort it’s pretty dead cert that you’ll be having a Gala Dinner with music and dancing afterwards.  I was looking forward to this, thinking that dinner would go on until around 10pm then it would be dancing and a glass of fizz to see the New Year in.  How wrong I was.  The hotel tried a little to hard for this.

Dinner began at 8pm by 11pm the food was still coming out and we were onto around course number 7 or 8, sea bass which was dry and totally murdered followed by lemon sorbet as a palate cleanser, children gave up and went to bed. At 11.30pm they brought out the main meat course (we had lost count of courses and also the will to live), we couldn’t eat it, too much food, too late at night and we wanted to party so we escaped from the restaurant, changed into our ski gear and took to the slopes in search of adventure.

11.50pm on the slopes, -15c, lots of locals around and a much better atmosphere than in the hotel.  Wrote my name in the freshly groomed piste and got a dirty look from the chap driving the piste basher who had just finished grooming it then the fireworks began.  Not displays, just locals setting off fireworks all over the place.  On the slopes, in the valleys, everywhere, it was brilliant.  Got back into the hotel at around 12.15am and the music had started but we copped out and went to bed anticipating a brilliant days skiing as most of the Italians would be in bed and the slopes clear.  We were right.