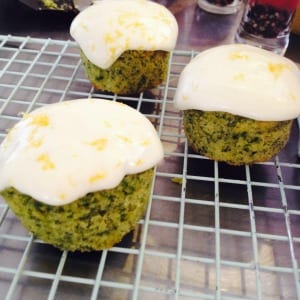 These are super cool orange-flavoured-green-cupcakes. They still contain the same calories, sugar and fat as a standard cupcake but the addition of the kale gives them extra nutrients.  Try varying the flavour by using lemon or lime instead of orange, add dark chocolate chips or a tablespoonful of raw cacao powder, omit the citrus and add dried fruit, chopped nuts and some spices such as cinnamon, nutmeg and ginger. Click for the YouTube version.