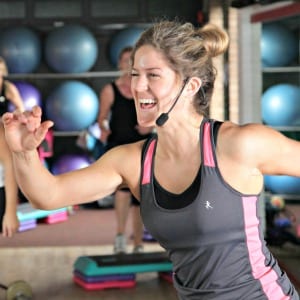 How am I going to win back my body and look great in a bikini this summer? I’m a member of Racquets gym in Thame and have been for 23 years or something daft.  They have a Personal Training membership so I had a chat with Martin King  one of the personal trainers.  I told him I wanted to shift the weight and needed a little motivation so as part of the PT membership Martin and I started training 6am on a Thursday (aargh!).

We hit heavy weights, he taught me how to do proper squats, not the wimpy ones you see most people doing in the studio but proper ones that hurt your quads as well as your glutes and had me doing HIIT (High intensity training).  I can’t do any impact as I have very little cartilage in my left knee from years of running, so this was a challenge. Martin got round this splendidly and I escaped having to do the dreaded ‘burpees’, lots of rowing and boxing.

Over the past 6 weeks I’ve toned up, I’ve lots inches everywhere, my arms have muscles on them I’d forgotten about and my legs are starting to look better but still have long way to go.  I moaned about this at 6am last Thursday morning and Martin demanded to know what I was eating, did a BMR analysis, asked loads of other questions and as soon as I admitted I craved sugar and ate chocolate nightly he said that I had to give up carbs.  A max of 35g of carbs per day, higher amounts of fat and protein.  That way my body would go into ketosis and would turn into a fat burning machine, then I could start to reintroduce carbs again.  35g of carbs is around 2 carrots, or one skinny latte and a carrot, I’m NOT giving up coffee and it needs to have milk in it.

Over the years I know that if I reduce carbs I lose weight.  I have tried but t’s just been difficult to keep focussed and not hit the biscuit barrel at 4pm and have a little chocolate at 9pm.  It’s odd, when you’re paying someone as a personal trainer and you find yourself being honest about what you eat and admit your chocolate intake it has more of an effect than telling yourself.

Last Thursday I logged into My fitness Pal, changed the settings to Martin’s recommendation and made sure that I entered all the food in the food diary and kept to it.  It’s very much like the Atkins diet and you know what?  It works.  So far I’ve dropped 3 lbs this week, I’ve not been hungry, I’ve not craved chocolate or sugar but I am missing fruit and yoghurts.  I’ve starting drinking gin and slimline instead of wine and cobra and I didn’t have an aperol last Saturday.  Downside is I’m becoming a gin snob.  More of that later.

I also became really excited in the supermarket and transferred from looking at the fat content to looking at the carb content when shopping.  On Saturday night I thought it was going to be very difficult as I was at a charity quiz night and all the team brings wine, chocolates and shed loads of crisps and nibbles, none of which I could eat.  I loaded up with olives, manchego cheese and almonds and I didn’t touch a crisp or chocolate, I luxuriated in my one gin and slimline and felt brilliant.

Monday morning’s Body Design class with Claire Finch is usually tough but this week it was really hard, probably not helped by working my arms in the gym on Sunday. Not sure if was no carbs or what but I really struggled.

I can eat cheese, yeay, currently I’m living on scrambled eggs and smoked salmon or ham for breakfast, salmon or chicken salad at lunchtime, a lump of edam or a spoonful of hummus and cucumber for a snack and last night I had a seafood platter from M&S to share with my Mum and homemade spelt and seed bread which I allowed myself a slice of.  I am not hungry, the weight is coming off and I’m struggling to eat the 1200 calorie allowance which I’m amazed at.

Today I wore a maxi dress that I haven’t really worn since I bought it 2 years ago as it’s very clingy and my hips and thighs just looked too lumpy, today it looks great, result!

Maybe in a week or two I’ll post a photo, refuse to show you the before shot as it’s not nice but I’m determined this summer to wear shorts in public and to look good in a bikini all the way down to my blue painted toes.  Martin’s brilliant and so are the other trainers at Racquets, actually, no, sorry got that wrong, they’re total bastards……