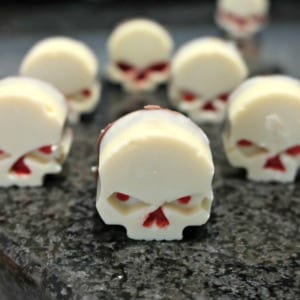 With only a couple of weeks to go I’ve been getting gruesomely creative in the Halloween department.  I’m running two workshops, Spooky Food which has been really popular over the years and is great for younger children and Whizz Bang Food.

I created Whizz Bang Food an introduction to molecular gastronomy for teenagers.  The aim was to entice children who love science but maybe don’t see cooking as cool to come along and try this alternative approach.  Heston Blumenthal for kids really.

For Halloween I wanted to develop this into a gruesome version so here’s what I came up with:

I had great fun playing with the skull chocolate moulds yesterday, they taste fantastic and received comments from the children -f

“They are soo cool”

“OMG they are awesome, are they ALL chocolate”

Yeay, now to make up the eyeballs…