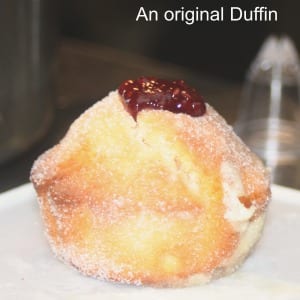 Do you want a good excuse to bake?  This one is brilliant.  Breakthrough Breast Cancer’s first ever Great Pink Bake Off is Friday 18 October, so get baking, get your friends involved, eat, bake, share and raise money for this amazing charity.

“The need for Breakthrough’s research has never been greater; breast cancer is still the most commonly diagnosed cancer in the UK, affecting 50,000 women every year and killing 1,000 every month.  So we are urging everyone to raise some dough and help us beat breast cancer” say the charity.

On Monday I was invited by Breakthrough Breast Cancer to take part in a baking masterclass hosted by Bea Vo of Bea’s of Bloomsbury at L’Atelier des Chefs in Wigmore Street.  This is the first time in ages that I’ve had the joy of travelling into London in rush hour.  I usually get the train in around 9.30am missing all the crowds and I’m used the tubes being empty…..not at 8.30am they’re not, bit of a shock to the system.

There is a bit of war going on at the moment between Bea and Starbucks, known as Duffingate, and good on her to take on a monster like Starbucks but she is totally justified.  Bea created her Duffins two years ago and Starbucks have just attempted to register the trademark against their name so she’s got a fight on her hands and I wish the best of luck with it.  This morning after breakfasting on freshly brewed coffee, croissants and fresh fruit we were taught by Bea how to make these controversial cakes.

A duffin is a cross between a doughnut and a muffin.  A muffin based flavoured with nutmeg which is then baked, rolled in melted butter and then in caster sugar.  Raspberry jam is then piped into the centre of the duffin.  They are delicious, not a healthy choice but isn’t that the whole point of cakes?  They’re not meant to be good for you, that’s why you only eat one and go for a 10km run or 30 min cycle ride afterwards isn’t it?

Once our Duffins were baking Bea demonstrated how to make piping bags from baking parchment, clever dick here makes them all the time so I got the got the job making extra – that’s what happens when you show off! We experimented with writing in chocolate and then made Italian meringue buttercream, flavoured it with raspberry puree and piped it onto some freshly made cupcakes from Bea’s bakery.

So go on, get baking and if you need inspiration you could download my APP Cupcakes, Muffins and Afternoon Tea