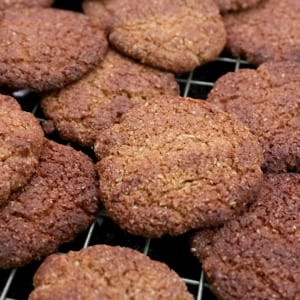 I’m back cutting my carbs to get myself back into bikini shape (I know, I ought to know better and stick to the plan, but I didn’t, it was Christmas then Easter, don’t judge!).  I am perfectly capable of eating clean and lean and low carb but I have such a bad sweet tooth I NEED something.  OK let’s rephrase that, my willpower is awful when it comes to 4pm, I crave sweet things and it’s sooo hard.  So instead of resorting to the biscuit barrel or rather the homemade cookies and scones I make for my children I have to find an alternative.

I’ve been focussed on developing recipes that are low carb and sugar free and that actually taste nice so I want to eat them.  Believe me, there are a lot of cookies in the bin that were completely inedible.  I became so fed up of trying other people’s recipes that I gave up and invented my own.  This is one of them, the gingerbread is soft not crisp and it tastes really good.  My husband and children ate it without flinching, said they preferred the original ginger snap recipe but this was good.  Praise indeed.

Warning  – this isn’t actually sugar free due to the molasses or black treacle, you need this to get the flavour, so they’re low sugar

Resulting nutritional information per biscuit, based on www.myfitnesspal.com is :