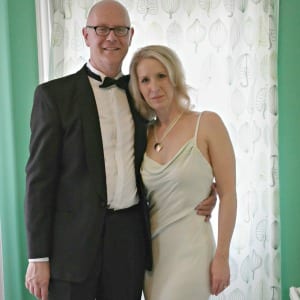 End of week 2 and 5 lbs lighter plus a good couple of inches gone too.  I’m feeling much better about my body, I actually feel like I’ve got my body back after a couple of years fighting for it.  I know, it sounds silly but there we go.

The first goal was to wear my lovely pale green Ghost gown for Dinton Ball which took place last Saturday, 10 May.  I’ve had this gown for a good 10+ years, or longer, it’s an original Tanya Sarne gown.  It’s cut on the bias with a slight drape at the front and a very low plunging back which means stick on bra and no-show knickers.  Tights are a no go and so are slips as anything around the waist is seen.  Any lumps and bumps around the hips and thighs are also highlighted – hence needing to lose a couple of pounds.  So here’s the dress with me in it, and a good dose of fake tan, no Spanx in sight, I refuse to buy them.  The frock looked great.

I fell off the wagon on Saturday though.  My Mum had a hospital appointment on Saturday afternoon, she doesn’t go out much (her choice) and dislikes eating and drinking in public (self conscious due to Parkinson’s Disease) so when she suggested stopping at Costa for coffee and cake I jumped at the opportunity as this is a rare request.  She would only eat cake if I shared it (she weighs under 6 stone), so the ‘sod it’ factor came in, I had half a slice of coffee and walnut cake with her.

Off to the ball, two glasses of champagne later and as I couldn’t remember what wine we’d ordered the only one on the table with our name on it was a bottle of red.  I’m not keen on red so I decided to be incredibly self righteous and not drink any more and drive home at 2am. I left the carbs with main course but did have the bread pudding as part of the dessert.  The real downfall was at midnight when the lovely Ricky and Emily from The Egg House Charcuterie served up bacon butties, diet and low carbs out the window, had to have one.  It was sooo good.  Pete tried to take a photo as he couldn’t believe I was tucking into bread, white bread too, but he wasn’t quick enough, that buttie was downed without touching the sides of my mouth. OMG it was soooo good.

Next target is to get back on track, lose another couple of pounds as I’m off to Rome in two weeks and want to wear shorts in public without feeling self conscious, still craving sugar, chocolate and especially fruit.  I’m now aiming for between 30-50g carbs a day mostly fruit and veg so just have to stay off the unhealthy carbs and the sugar and focus again.  I’ve been making my own version of Marks and Spencer’s Blackcurrant Yoghurt, lower in carbs and way more tangy as a huge reduction in sugar.

I made it to the gym on Sunday morning whilst my lovely husband was nursing a hangover, also didn’t make a complete fool of myself like some of the very drunk people at the ball on Saturday.  Took me back to school balls when the headmistress insisted on vetting ALL the photos before any were published to make sure none of the children were embarrassed by their parents…..would have been interesting on Saturday.