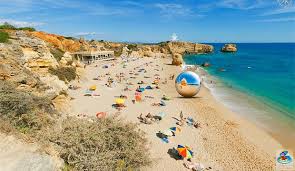 My big girl, aged 17 and 9/10ths had just come back from her first solo holiday with her best friend.  They looked at Magalluf and decided against it, I suggested Ibiza as that’s where I’d have gone as I love clubbing and that would be my idea of heaven….again a resounding ‘no’.  Big girl is off to uni in Sept to study physics and engineering, she definitely takes after her Dad, I’m an art school drop out.  Her idea of clubs is ‘hell’ as she wants to discuss theoretical physics and solve the question of life the universe and everything which is difficult to do in a very loud environment.

They settled on Albufeira in Portugal and got a last minute cheapy in a self catered 1 bedroom apartment in a hotel miles away from the beach but with its own pool.  She’s never experienced ‘normal holidays’, for the past 17 years of her life her holidays have consisted of:

You can see the holiday standard she has been set, hmm, Albufeira?  It would be an experience.  They had a list of things not to do:

This is what happened over the next 4 days

Day 2 – text – “loads of 40 year olds and kids but not many our age so we’re getting loads of free drinks from the bars so we agree to go in, loving strawberry daiquiris, the strip is full of awful restaurants, there are no Portuguese people here just loads of Irish and people from Liverpool, lots of crap food restaurants”

I ought to add that both and her and her bestie are tall, slim, gorgeous and intelligent, by tall I mean with heels on they are probably around 6’2″ and scary as hell to any chaps.  Some chap put his arm round her in a bar and without thinking she did one of her judo moves (she did judo for years) and he ended up on the floor surrounded by a load of his mates who were completely awestruck and a little in love.

She got home today, the two of them had a fantastic time but couldn’t believe the behaviour of some parents in the hotel (swearing at small children and each other in front of small children) and some of the other people they met.  They were appalled by the ‘strip’ and the food the restaurants had to offer plus the lack of any locals, all Germans and Dutch with a  few Brits.  They got talking to a bunch of guys in a bar and weren’t giving them the time of day until one of them sheepishly admitted that he’d studied Maths at Oxford and that was it, in a corner with drinks talking about her favourite subjects – Maths and Physics, this lad couldn’t believe it, he’d been hiding the fact that he’d gone to Oxford and studied maths all week as most of the girls he spoke to saw it as a right turn off.

The pair of them sounded so middle class retelling their adventures, it was really funny, her present to me – a bottle of peri peri oil, love it.

They had a great time but she’s looking forward to a ‘proper holiday’ soon, see you soon Neilson.